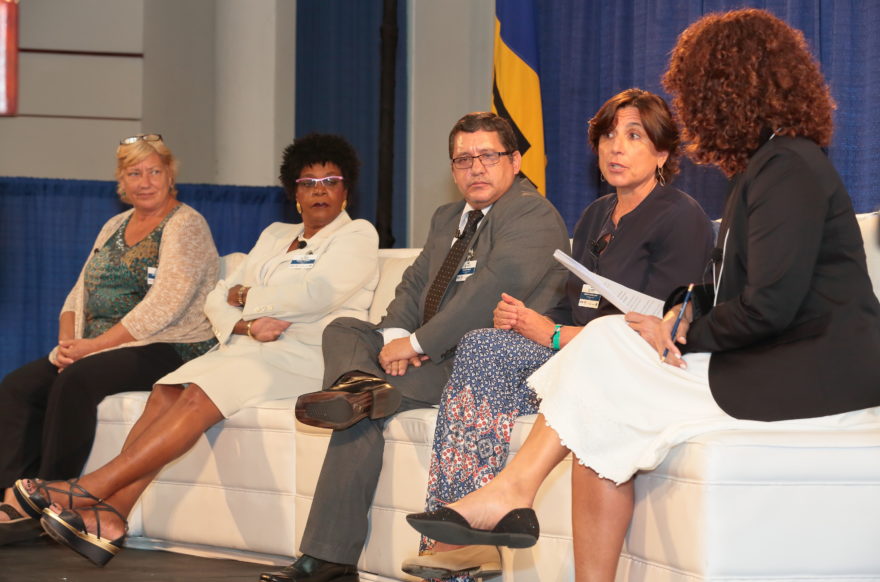 The Compete Caribbean Regional Dialogue held at Lloyd Erskine Sandiford Centre on Tuesday November 22, provided an opportunity for donors and beneficiaries of the Program to reflect on its execution over the past six year, network and build a case for or against a phase two of the program.

The Dialogue featured a number of presentations by high-ranking IDB, UK and Canadian officials, panel discussions by beneficiaries where they got to tell their stories, and discussions from academics who intellectualized about the program’s benefits. Sylvia Dohnert, Executive Director of Compete Caribbean and Claudia Stevenson, Specialist, Competitiveness and Innovation Division, IDB also discussed Compete Caribbean II and the expected results and framework for its implementation.

In the first panel discussion led by Juan Carlos Navarro, Principal Specialist, Competitiveness and Innovation Division, IDB, panelists, Kapil Mohabir of Plympton Farms Guyana, Ronald Hinds, Teleios, Trinidad and Tobago and Duquesne Fednard, D&E Green Enterprises, Haiti told of their experiences working with Compete as private sector actors. Under the theme “New Ideas that Change the Region: Innovation in the Caribbean”, they all spoke of the barriers they faced regarding funding and credited the creativity, structure and robustness of the Compete Caribbean Program as being responsible for their business accomplishments thus far.

During the luncheon interval, José Miguel Benavente, Division Chief, Competitiveness Technology and Innovation, IDB speaking on the topic: The imperative of Innovation, said that countries sometimes adopted the position that they will invest in innovation once they have grown, but research indicates that the reverse is true: those countries that have invested in innovation are the ones that have made huge leaps in all aspects of economic development over the past century. For the Caribbean, he highlighted the importance of inter-firm collaboration to reach economies of scale, particularly given the small domestic economies…