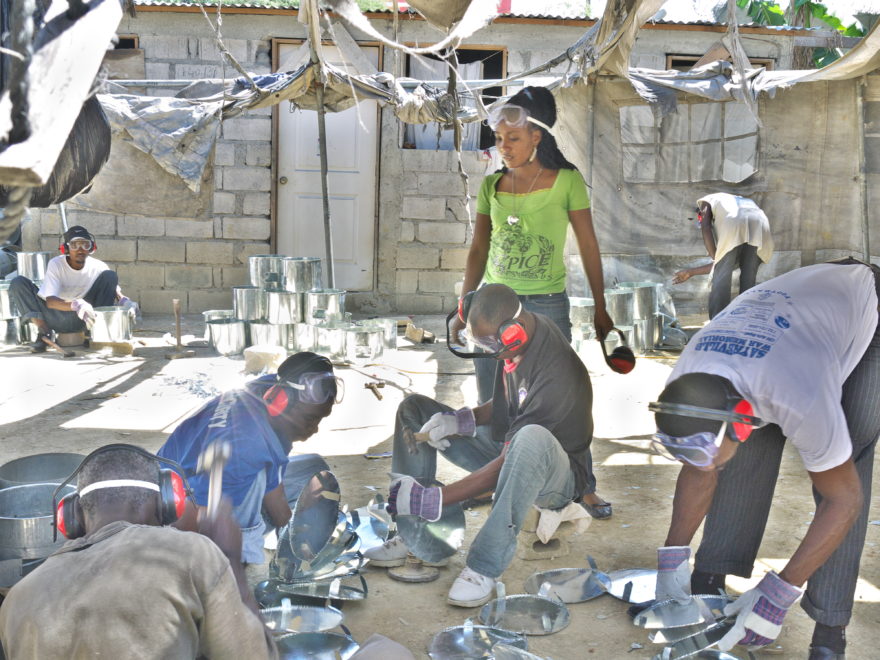 In the latest of a series about remarkable companies, Making It speaks to the director
of a Haitian company manufacturing cookstoves that require half the amount of charcoal needed by traditional stoves.

Over the past 60 years, Haiti has received more than US$20bn in aid for reconstruction and development from the international community, but these large sums have not helped the nation move out of poverty. Around three-quarters of the population lives on less than two dollars per day, and more than half live on less than one dollar a day.

The failure of foreign aid in Haiti convinced 37-year-old entrepreneur Duquesne Fednard that he had to look for a solution. Talking to Making It magazine, he said, “Haiti has always been portrayed as a poor country that relies heavily on foreign aid, but we’ve seen little positive impact on the ground. As a Haitian, I want to change this image. I want to prove that we can solve our own issues with our own hands.”

Fednard firmly believes that “the first step to get people out of poverty is to provide jobs”. So, after studying and working for almost 14 years in the United States of America, he went back to his homeland, aiming to create a social business that would provide jobs for Haitians.

An idea had come to him during a business trip to Ghana in early 2008 when he had been very impressed by the efficient charcoal stoves made by a local company, Toyola Energy. He thought that these stoves could make a real difference for Haiti, where most people use charcoal stoves to cook their food, spending around a quarter of their annual income on the fuel. In 2009, he founded D&E Green Enterprises, which produces fuel-efficient cookstoves.

Setback and breakthrough
In January 2010, shortly after the establishment of the business, a devastating earthquake struck southern Haiti, claiming more than 220,000 lives and leaving more than 1.5 million people homeless. The newly-built factory in the capital, Port-au-Prince, collapsed and nearly all the equipment inside was destroyed. Fednard was on the verge of giving up, but his employees refused to let him walk away. In an interview with the BBC, he recalled the moment when he truly felt the responsibility of a social entrepreneur, “One guy said to me, ‘This is the only thing right now that we were holding on to. The earthquake took away our families and houses and everything we own. You’re taking the last thing that we were counting on.’”

Realizing that it was no longer his business alone, Fednard decided to carry on. Without a factory, the production line was moved into two tents, where workers continued to make the stoves by hand. Despite the setback, the company managed to produce and sell over 40,000 manually-made stoves by 2013.

In 2014, D&E made a breakthrough. With money from social investment and from his own
savings, and a low-interest loan, Fednard, together with his employes, successfully built a new factory. On 1 June, 2014, D&E Green Enterprises officially moved into the new production site. With most of the machines in place, D&E is moving to mechanized production. Between June and the middle of August, 1,500 EcoRecho charcoal cookstoves were produced by newly trained workers. As Fednard told Making It, “The number may appear small, but it is a transition period for us to phase out the manual production process. Now each batch, we only make a few hundred stoves, but this makes it easier for us to analyse how to produce stoves faster and better. After this testing process, we aim to have the capacity to make 3,000 to 4,000 stoves per month by the end of this year. That is, around 40,000 stoves per year.”

D&E Green Enterprises currently employs 30 people for the EcoRecho project. Asked whether machine manufacturing will decrease employment opportunities for Haitians, Fednard says he is not worried, “Machines will enable more efficient production and more consistent quality. This will lead us to bigger markets, so eventually we’ll be able to provide more jobs.”

In Fednard’s plan, the fuel-efficient stoves produced by D&E will not only cover the whole Haitian market, but also allow the start of exports to neighbouring countries with similar conditions. The company is also expanding into other sustainable energy technologies. For instance, in order to address the electricity needs of rural Haiti, later this year it plans to launch, along with two partners, the first pilot plant using small-scale gasification to generate electricity from agricultural waste.

Recognition and awards
Today, D&E is a member of the Clinton Global Initiative, the UN Sustainable Energy for All initiative, and the Global Alliance for Clean Cookstoves. In 2013, D&E won the Ashden Award for Small Island Developing States in the Latin American region in recognition of its excellence in the field of green energy. Since the award, Ashden has continued to support D&E, and international programme manager, Chhavi Sharma, says the company is making remarkable progress. “D&E Enterprises is doing incredibly important work to reduce fuel poverty and tackle deforestation in Haiti. We have been impressed by Duquesne’s sheer resilience and determination to succeed against all odds, despite the 2010 earthquake and the hurricanes that followed, as well as the countless obstacles associated with doing business in Haiti.”

Economically and environmentally viable
The EcoRecho charcoal cookstove is the most popular of D&E’s range of products that cater to customers with different income levels and family sizes. The name ‘EcoRecho’ states clearly the advantages of fuel-efficient, charcoal cookstoves: ‘eco’ stands for both ’economic’ and ‘ecological’, and ‘recho’ is the word for a stove in the Creole language. The EcoRecho design is based on that created by Ghana’s Toyola company but has been adapted to Haitian users’ tastes and cooking habits.

The biggest size stove serves a family with five members and sells for US$12. The price is double that of traditional charcoal cookstoves, but the EcoRecho stoves actually save customers money. Firstly, compared to traditional stoves that last between two to six months, EcoRecho stoves are expected to have a lifespan of two years. Meanwhile, D&E promises a one-year quality warranty, a six-month replacement guarantee against faulty manufacture, as well as a ‘money-back’ warranty, which, says Fednard, “means if the stove doesn’t save you money, bring it back”. Therefore, instead of buying two to six traditional stoves each year, customers can now just buy one EcoRecho stove every two years.

A recent United States Agency for International Development (USAID) study done on the EcoRecho stoves shows that the 100 households that participated saved on average US$102 in energy costs over a year when using EcoRecho stoves to cook one meal per day. This saving can make a real difference for the average Haitian household. “With that saved one hundred dollars, people can start a small business, or parents can send kids to school. That can really help them to escape poverty.” Fednard said…